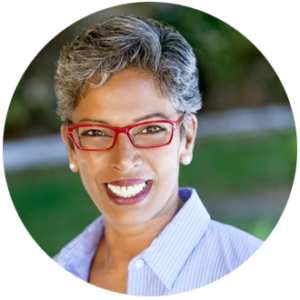 Currently, Punam serves as Executive Director of the Elaine P. Wynn & Family Foundation, a private foundation that exists to advance fundamental change, primarily related to equity, civil rights and conservation. She also operates her own business as a speaker, trainer and writer.

During her tenure, MGM MIRAGE received numerous awards in her areas of responsibility, including being ranked among the “Top 50 Companies for Diversity” by DiversityInc magazine, one of the “Top Corporations in the U.S.” for multicultural businesses by DiversityBusiness.com and as one of the “Most Admired Companies in America” by Fortune magazine. Additionally, under her leadership the Company’s philanthropy program, including its centerpiece employee-directed foundation, set new standards for strategic philanthropy and employee engagement within the gaming industry.

Prior to joining the gaming industry in 1996, she had been with the Las Vegas Chamber of Commerce for six years, holding a variety of management positions, the last of which was Senior Vice President of Government Affairs.

Education
Mathur attended the University of British Columbia in Vancouver, studying elementary and special education, from 1979-1983.

A champion and advocate for public education, she has a long history of involvement with the Clark County School District, the fifth largest district in the nation, having served on a lengthy list of committees and special task forces over the years. She also works closely with the NV Department on Education in a variety of roles to advance the ball on education reform in Nevada.

Mathur was the founding board chair for Three Square, a non-profit organization dedicated to eradicating hunger in southern Nevada. She has served on the Board of the United Way of Southern Nevada for over two decades and is active with Communities In Schools, serving as Vice-Chair of the Board of Directors.

She is also active in a number of organizations to improve the effectiveness of the child welfare and foster care systems.

She has received numerous awards including the inaugural Athena Award from the Nevada Women’s Chamber of Commerce (2004), induction into the Nevada Women’s Chamber of Commerce’s Women’s Hall of Fame (2005), “Humanitarian of the Year” by Junior League (2012), “Achievement Award” by Las Vegas India Chamber of Commerce (2013), as a Woman of Distinction by Nat’l Association of Women Business Owners (2006), a Platinum Achievement Award by the Cooperative Development Energy Program by Fort Valley State University (2011), A Lady of Distinction by Olive Crest, an organization advocating for needs of children in the foster care system (2009) and Woman of the Year by The Gay and Lesbian Community Center of Southern Nevada (2009).

Personal
Mathur resides in Las Vegas with her three amazing sons and one spectacular daughter.